The brand new Entreq Olympus Infinity is now with us on demonstration.

The remit of the Olympus Infinity is simple, to improve the performance of your hi-fi by removing noise present in the signal path. By removing this noise you get to hear more from your system. Better detail and dynamics, but with a natural and organic presentation.

Entreq produce a range of ground boxes with different capabilities and applications and in essence they all do the same thing, but the amount of noise a box is capable of removing increases as you move up the range. Some boxes are single posts (Minimus, Silver Minimus, Olympus Ten, Olympus Minimus), some boxes are multi-post boxes where posts are shared (Silver Tellus, Olympus Tellus and Olympus Infinity) and there are also multi-post boxes where the posts are independent from one another (Tellus 2 and Poseidon).

The Silver Tellus is superb and very popular but in my experience to get the very best from a larger system having a number of independent boxes/posts is the way forward. The benefit of Silver Tellus is easy to demonstrate, but the merits of keeping ground connections separate to one another is very easy to hear when you try it. 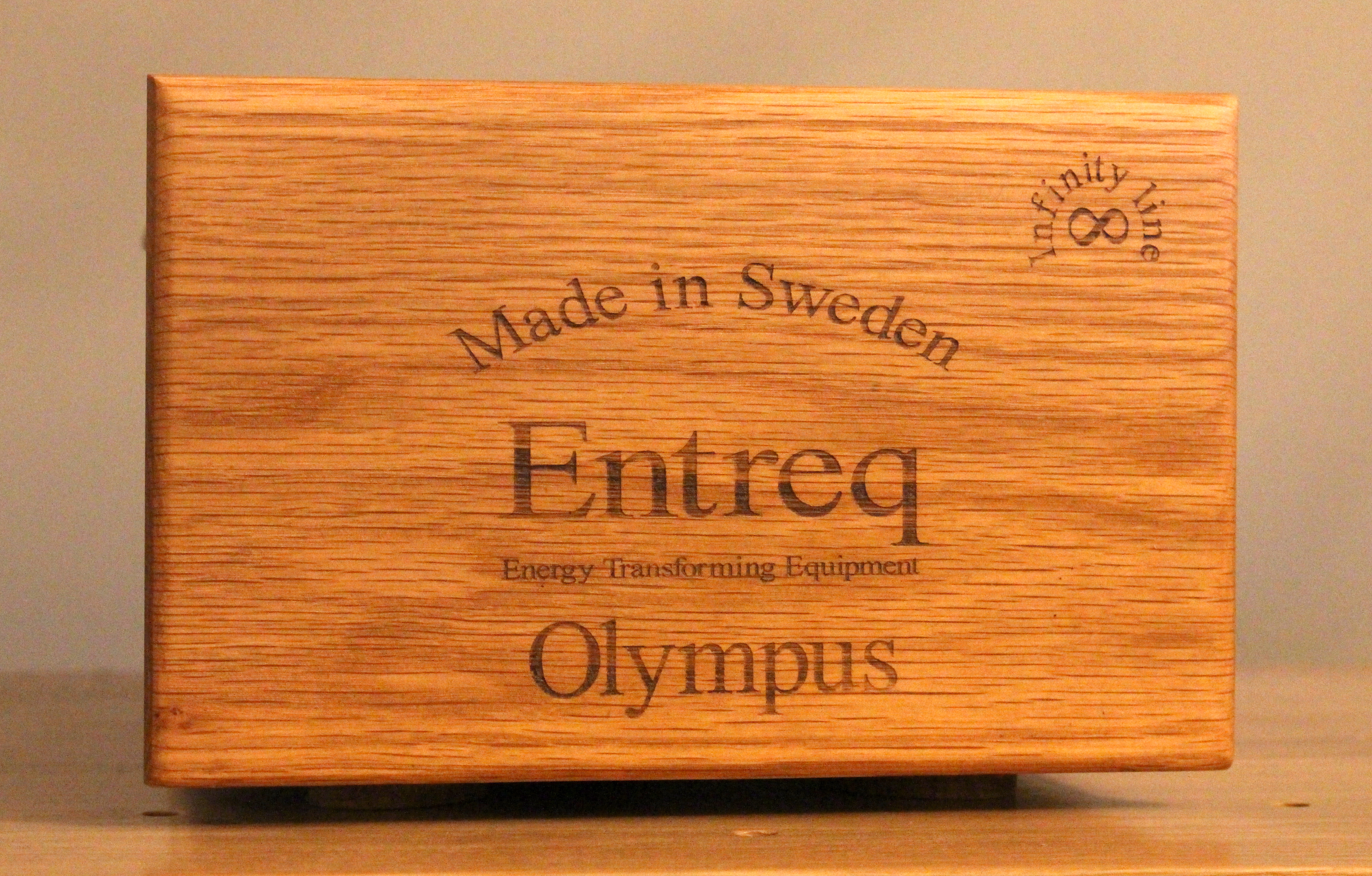 The Olympus Infinity has 2 ground posts on the rear panel, which are shared together, but Entreq have come up with a new design for the internals of this box, combined with its improved capacity and the results of this are quite something. You can happily connect 2, 3 or even 4 things to this box and the system keeps improving, even on a system that is already well grounded.

Digital cables and USB cables (and phono stages) have always been best grounded on their own as always due to the high level of noise contained with them and this remains unchanged, but other than that it appears that with the Olympus Infinity almost any combinations of connections works brilliantly.

It is pretty substantial weighing in at almost 10kg, it contains approximately 4 times the mass and 5 times the amount of silver compared to an Olympus Ten for example.

In my demo system I had the Vitus Audio RI-101 amplifier connected to an Olympus Ten and the RD-101 DAC/Streamer connected to one of the posts of a Poseidon.  Any existing Entreq owners reading this will know when you first connect something up it takes a little while for the full benefit to come to the fore, but you can usually hear the presentation changing after an hour or so.

I started by just connecting the RI-101 to the Olympus Infinity and the impact of doing so (with an Apollo Infinity ground cable) was audible instantly. The level of detail increased, as did the dynamics, but it never felt forced, aggressive or lively, it was the type of presentation you could simply listen to for hours. The sound-stage front to back depth increased and vocals seemed to hang with much greater authority. Once it had been connected for a good few hours the system was sounding better than I had ever heard it.

The following day I  disconnected the Vitus RD-101 DAC from the Poseidon and connected that to the Olympus Infinity as well. Again, the effect of doing this could be heard almost immediately, it was simply more of the same. The sound was endlessly detailed and completely engaging with a much greater level of authority and an almost ethereal character to it.

If you want to hear your system perform like you’ve never heard it you should really organise a demonstration of an Olympus Infinity. If you have a system you enjoy but want more from it (who doesn’t at the end of the day!) it can offer a substantial upgrade that represents great value for money compared to other upgrades you may need to make to unlock the same performance increase and of course with a ground box no matter what electronics you upgrade to down the line the ground box is there to get the very best from your system!

If you have a more modest system remember the ground boxes start at £290 for a Minimus and the 2 most popular boxes are the Silver Minimus (£480) and Olympus Ten (£1100). Grounding an entire system pays dividends but you can get real gains by simply grounding a couple of key components in your system, for example your integrated amplifier, or your router if you stream lots of music, or a phono stage if your turntable gets lots of play time. There is no magic recipe card for any system.

We have the entire range of ground boxes available for demonstration and an extensive selection of ground cables.

If you are new to Entreq and are interested in what it can do for you please get in touch, I’m happy to converse via email or have a conversation on the phone. Equally if you are an existing Entreq user, but want to take your system to the next level I look forward to hearing from you.