At the Munich High End show this year Melco held a press release to announce the upcoming integration of both SongKong and Minimserver into the Melco platform. You have been able to use a version of Minimserver on a Melco for some time now and SongKong has been working brilliantly when installed on a computer, but to have them both running on the Melco turns it into a pretty unique and serious proposition in the world of ripped music, servers and mismanaged (and often incorrect) metadata.

I know many of my customers already use SongKong and/or Minimserver with their Melco, but the integration of both of these programmes into the Melco directly will have some distinct advantages.

To the uninitiated please read on, there’s a bit of an overview on Metadata, SongKong and Minimserver and what they all do!

Music Metadata (which sometimes get referred to as ID3 tags) is the information that is embedded into digital audio files which help you identify what the file actually is. In this digital age of digital music libraries and streaming content accurate Metadata is more important than ever, but unfortunately it is very easy to have incorrect or inaccurate Metadata which can really make finding specific artists and/or albums difficult.

There are lots of different computer based programs that can be used to rip your music, such as iTunes, dBPoweramp, Exact Audio Copy, Windows Media Player, XLD and many more. Whenever you rip a CD using one of these programs it looks to the Internet at one of several databases to gather information on the CD are your ripping – it is this information which is the Metadata. Unfortunately, the various databases can quite often use different parameters to one another and the results can vary wildly. None of them are necessarily wrong, but I see lots of music libraries on the my travels and inconsistencies can be substantial. If you connect an optical drive like a D100 to a Melco directly, the look-up database the Melco uses is Gracenote.

One common theme I often come across is a customer with an extensive CD collection that may go back quite a few years. Typically a customer started ripping their collection using iTunes, then moved to another program, then another as the software and ripping accuracy improved. If each of the programs they have used looked at different databases to create the Metadata all bets are off as to what the final ripped library may look like.

Some ripping programs use multiple databases to gather the Metadata so ripping albums from the same artist at different times can result in very different Metadata depending on the database the program used for the look up at any given time.

“The Beatles” or “Beatles, The”?  There is no right or wrong way to display this, it is personal taste, but I’ll often see a library where the customer has all the albums by a particular band, but they don’t all display in artist view due the way the word “The” is treated. Half of the albums will under “The Beatles” and the other half under “Beatles, The”.

Another recurring issue is compilation albums where each track is performed by a different artist, the Metadata often can treat each track as a separate 1 track album album which makes it rather frustrating!

Albums where several tracks may have a guest musician playing as a “featuring artist” often get these guest tracks put into an album all of their own away from the other tracks on that album. The image of the Leonard Cohen album above is an example of this, this is a double live album and The Webb Sisters feature on this album – the tracks they are credited on have been pulled away from the main album and placed into an album on their own – a common problem but very easy to fix with Songkong!

Fans of classical music with no doubt be aware of the minefield of metadata and classical, it is quite different to any other genre of music in that there is credit for the performer, the composer, the orchestra and the conductor, most programs do not take this into account and large classical collections can often be a real challenge to find music easily.

What is not Metadata?

There is definitely plenty of confusion going on in the wider world as to what Metadata actually is with a ripped CD or a downloaded album.

01 Quiet Fire.wav and all the other tracks are the individual files that make up the album and the tracks you can see are the actual filenames – this is NOT the Metadata, the actual Metadata is embedded within the tracks themselves and you cannot see the actual Metadata from this view.  Someone could have a perfect file structure to the their entire music library, but there is no guarantee that the Metadata will be the present and/or correct depending on the ripping program/download service that was used.

Some customers quite often use control apps in folder view to search their music (which is fine to do BUT) – this view ignores the Metadata and uses the actual folder/file structure to display the music. If that customer then switches to the more traditional artist or album view and they have missing metadata their music that shows correctly in folder view will not display correctly when they change from folder view to artist/album view.

Song Kong is an intelligent music tagger program that has been designed to make the task of managing, organising and cleaning up your digital music collection nice and simple.

There has been a specific version of SongKong for Melco available for sometime now, but it needed to be installed on a computer on the same network as the Melco itself.

As your digital music collection grows so can missing artist information or album cover art, duplicate tracks or inconsistent or unnamed songs (“like Track 01”).  SongKong is designed to resolve all of these issues. It is a very simple yet powerful program and can fix your music collection in a few clicks whilst offering all the tools and options you will ever need to customise your experience in a way that is best for you and your music.

All you need to do with SongKong is simply point it at your music shares and click on the start button, in the first instance it will automatically fix missing artwork, incorrect spellings, missing track names (track 01 etc), even on albums that have absolutely no information at all SongKong can use Acoustic ID and fingerprinting to identify the tracks and fill in all of the blanks – it works brilliantly!

SongKong understands classical music as well, the requirements for classical music and Metadata are quite different to any other genre of music as outlined above and SongKong allows you use edit classical music using greater numbers of fields so to take into account composer, conductor, orchestra, movement and works.

If you want to manually edit the Metadata of specific albums, or even your whole library, SongKong will let you do it. It’s a great way to fix “The Beatles” and all the other bands starting with “The” to get them to display exactly how you want!

If you want add higher quality artwork (or different artwork) you can do that from within this section of SongKong as well. The manually edit Metadata button is my favourite part of the whole program to to be honest as it allows your to heavily customise your music library to your specific requirements.

If you make lots of changes to your music library, but the edits you have made are not to your liking it is very easy to undo the changes and start again. Aldo, downloading a status report of your whole library is very easy to do and a really useful function – it downloads as a spreadsheet so you can easily check any aspect of your collection. If you want to see all albums that are missing artwork for example it is really easy to do. There are over 130 fields in the spreadsheet!

You can also set up a watch folder as well, this allows SongKong to monitor your music folder and and it will detect when new music has been added and it will automatically fix any issues with it, think of it as a 24/7 housekeeping service for your music collection! 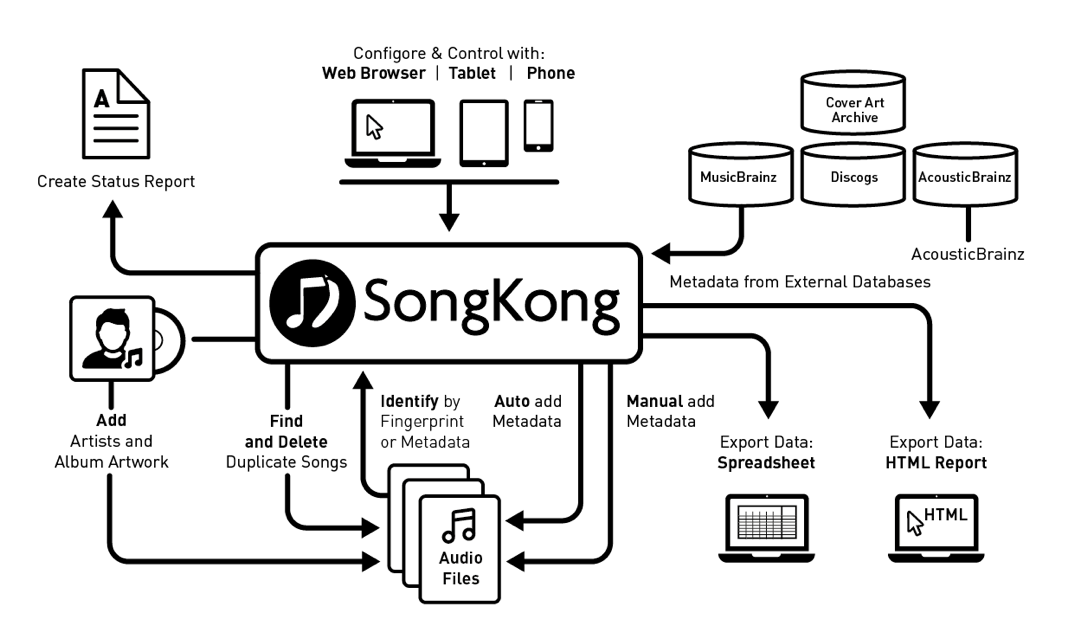 Minimserver is a very powerful music server and is without doubt one of the very best ways of organising and presenting your digital music collection to you. SongKong gets the Metadata correct in the first instance, then Minimserver serves it to you in a unique and powerful way.

Most music server software programs are fairly basic and will present your music to you in a limited number of ways, typically via Album, Artist, Genre, Track and Folder View. Minimserver is different in that it is incredibly customisable in that it will allow you to search your music by any Metadata field, not just the pre-defined fields.

So, if you are into classical music for example, you can set Minimserver to search for Composers, Conductors, Orchestras, Choirs, Soloists for example. If SongKong has been used to fill all the Metadata fields correctly the sky is the limit with how you can configure Minimserver.

Minimserver Intelligent Browsing allows you to search via any tag in any order, the example below shows 2 different routes to playing the same piece of music. The only limit is your imagination ultimately! 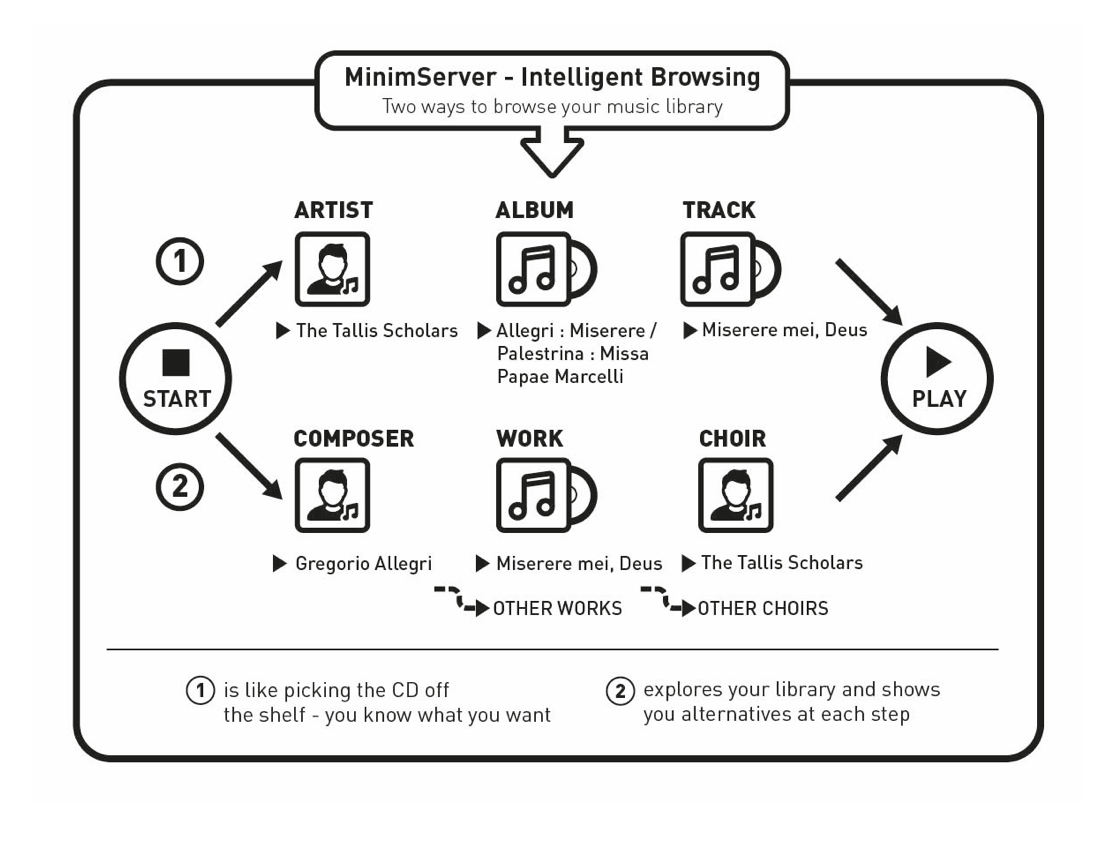 Fully configurable user profiles will be available on Minimserver when the integration is complete with Melco, Classical, Jazz and Rock/Pop all selectable from the front panel and depending on your music library it offers incredible flexibility and control as the profiles can be easily tailored to suit a specific users needs.

With the integration of SongKong & Minimserver onto the actual Melco itself will really increases the power of the Melco and the flexibility of keeping your music library Metadata correct. We are anticipating this major software release for Melco will go live in August and we believe this level of power, control and customisation is an industry first!

There will also be some aspects of control from the Melco front panel, very simple, quick and effective as you can see below from the SongKong menu.

Artwork is pulled in from MusicBrainz and Discogs and it is not just album artwork either, artist images can be added as well. You can configure Songkong to save artwork to the file system as well as the actual files themselves to support tools that do not understand embedded metadata.

Once this goes live it will put Melco in a really strong and unique place, from ripping, to tagging and displaying you have complete control of every aspect of the chain!

I hope you found this post useful and informative, if you have questions please get in touch! Thanks for reading