I’ve been an Exogal dealer for quite some time now, with focus being on the absolutely superb Comet Plus DAC. Priced at £2950 it’s a great bit of kit and one that will happily sit among more expensive company and not be outclassed or outperformed. Needless to say every one who has heard one has been very impressed.

It offers all the connectivity you could ever really need, USB, Optical, AES/EBU, SPDIF on BNC plus an analogue input as well. The most popular input is USB, so you can easily connect your Melco, Innous, Aurender or computer, the USB socket will playback all sample rates up to and including 32/384 kHz and DSD64 and DSD128. The optical input supports up to 24/96, the other digital inputs support up to 24/192 so you are well covered.

The Comet Plus can be used in a number of ways, primarily as a standalone DAC connected to an integrated amplifier (or pre-amp) via conventional RCA or XLR. It can also be used connected directly to a power amp and use its own in-built volume control, there is also a headphone output on the side as well. I have a customer who uses his Comet Plus on his desktop connected to a Mac and a pair of Audeze headphones for example.

The Comet Plus comes with a fairly basic remote control to select inputs (and volume if required), although I personally much prefer the Exogal app which connects to the DAC via Bluetooth to control, the small display on the front shows you the currently selected input and the volume level but it’s so small it’s a bit pointless unless you are up close to be fair.

The Comet Plus doesn’t use an off-the-shelf DAC chip to carry out the number crunching, nor does it use any FPGA implementations in its design. Instead it uses a complex custom designed processor running calculus derived algorithms – as such the DAC section of the Comet is quite unlike anything else out there!

Performance is best described as very analogue like, all of the detail and transparency you could ever crave is there, but there is a wonderful sense of refinement and a level of warmth to the music, it may sound like a terrible cliche, but it just simply sounds musical and engaging. It’s never overblown or fatiguing unlike many popular DAC designs do these days!

Until quite recently the Comet Plus was all I did with Exogal but I finally got around to getting the matching Ion Power Amplifier on demonstration as well, although to be accurate it’s actually referred to as a PowerDAC as opposed to a Power Amplifier, the Ion PowerDAC is priced at £3350. 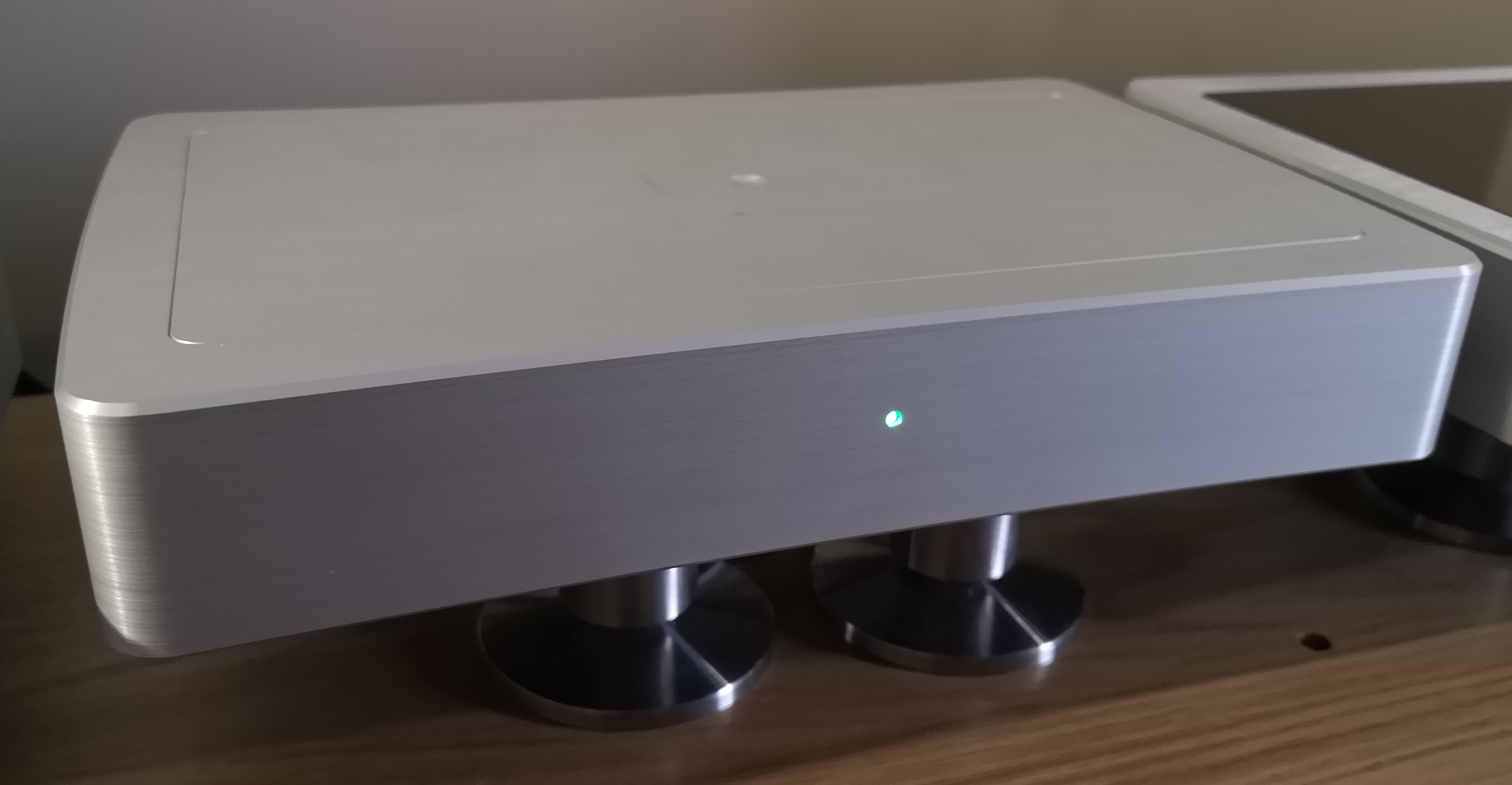 The Ion can only be used with a Comet (or Comet Plus) – you may have noticed on the back of the Comet there is a socket called Exonet which looks very much like an HDMI socket, this is a proprietary Exogal connection and is designed specifically to connect the Comet and Ion together. When connected together this way the Ion becomes a ‘load sharing’ partner to the Comet in terms of processing power.

The signal that is output from Comet via Exonet is still in the digital domain and the actual conversion to analogue is done in the Ion and the signal remains fully digital until the it hits the speaker outputs. The Comet processes the digital audio data in the time and frequency domains and the Ion processes it in the power domain.

The Ion is a digital amplifier, but is one which does not use the more traditional PWM (Pulse Width Modulation) as the basis for its amplification, as a result the Ion doesn’t share any of the negative traits that can often get associated with digital amplifiers (forward, aggressive, clinical sounding).

The PowerDAC is all about ‘the control of analogue power but in the digital domain’, this was tried many years ago by Wadia, but they couldn’t quite get it right and reverted to PWM technology, many years on Exogal have determined that electronic component technology had finally advanced to the point where analogue power at high levels could be quickly and reliably controlled by digital circuits and that a true PowerDAC design was now fully possible and the Ion was born as a result!

In order to keep this digital signal clean and safe, whilst avoiding the pitfalls of PWM, Exogal created some very clever tracking algorithms to look after the rapidly rising and falling signals. In effect, these algorithms created guard rails to track the output voltage to keep the output signal where it belongs. But it doesn’t end there, most amplifiers protection circuits are designed to simply protect the amplifier, but not necessarily protect the speaker from damage should something go wrong. 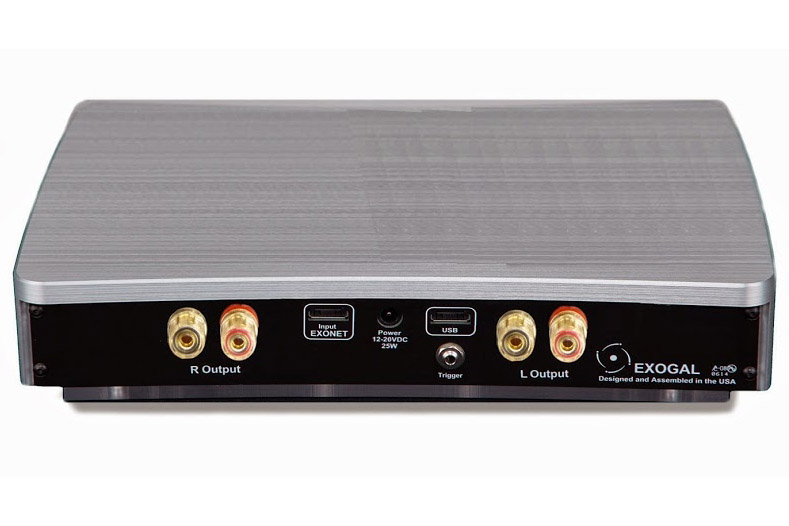 Exogal realised that it was a relatively simple matter to monitor the output signal and keep track of how the connected speakers were likely reacting to the signal, the men is white coats over in Minnesota quickly realised that they could sometimes identify situations where the speaker may be drawing too much power – because of a non-linear impedance curve for example. A few algorithms (they love their algorithms!!!) later and the Ion could predict some conditions that may be damaging to the speaker so that so it could safely shut down and in many cases do so in advance of the speaker or the speaker’s crossover being damaged.

Earlier in 2019 Exogal announced an update for the Ion, called the Hyperdrive – this update effectively allows the Ion to run closer to the guardrails, increasing output power and opening up the Ion even further in terms of dynamic range. Power output is 150 watts per channel into 8 ohms and it will quite happily drive a pair of Avalon Ideas, Avalon PM1 or even the Vimberg Mino without any difficulty at all. In fact, it controls all of them with absolute ease and the presentation doesn’t harden when you play at crazy volumes levels, it never gets upset or phased. Bass response is even, fast and ever so tight which to me translates to an amplifier that is in full control.

In performance terms the Ion sonically is simply an extension of the Comet Plus – I’ve never heard any digital amplifier (at any price point) sound like the Ion, it offers all those wonderful traits of being detailed and spacious but never aggressive or clinical and it certainly is never fatiguing in the way it presents the music.

If you are looking for a high-performing, compact system that offers all the digital connectivity you could ever need (plus that analogue input for a phono stage), enough power to drive and control a proper pair of speakers the Exogal pairing could be just the ticket! Connected to the compact N100 from Melco for example you get a really serious, yet svelte little system! This pair has been receiving some brilliant press from both UK press and across the globe and I figured it was time to shout from the rooftops about it a bit more!

You could spend a lot more money than the asking price here and end with something that isn’t as musically rewarding or engaging.

Part exchange is welcome as always so if you want to trade in your existing DAC and/or amp that is no problem. If you have any questions or would like to arrange a demonstration please get in touch.