Skip to content
Home/News/To Infinity & Beyond – A customer journey with Entreq!

To Infinity & Beyond – A customer journey with Entreq!

One of my customers recently asked me if there was a way I could integrate his Sonos system into his main hi-fi system so he could continue listening to the same music when he leaves his listening room and goes into the kitchen or office for example.

Easy enough to do, but unfortunately some of the socketry we needed to do this were in use with Entreq ground cables, easy enough to resolve as Entreq can easily re-terminate the cables so we different connections so we can free up the sockets required for the Sonos.

When I first suggested Entreq to this customer in the summer of 2017, he looked at me like I was crazy, I have known this customer for quite some time and I asked him something along the lines of – ‘Do you trust me? If the answer is yes you need to at least have a demo in your system to see what it’s all about’

A couple of weeks later a Silver Tellus and 3 or 4 ground cables were fitted to the system. As always with Entreq the effect is rarely instant – just forget about it and listen to some music. A week later a rather shell shocked customer couldn’t believe what had happened to his system, the presentation had become much more natural and more refined, simply put his music sounded a lot better and his system was more engaging! 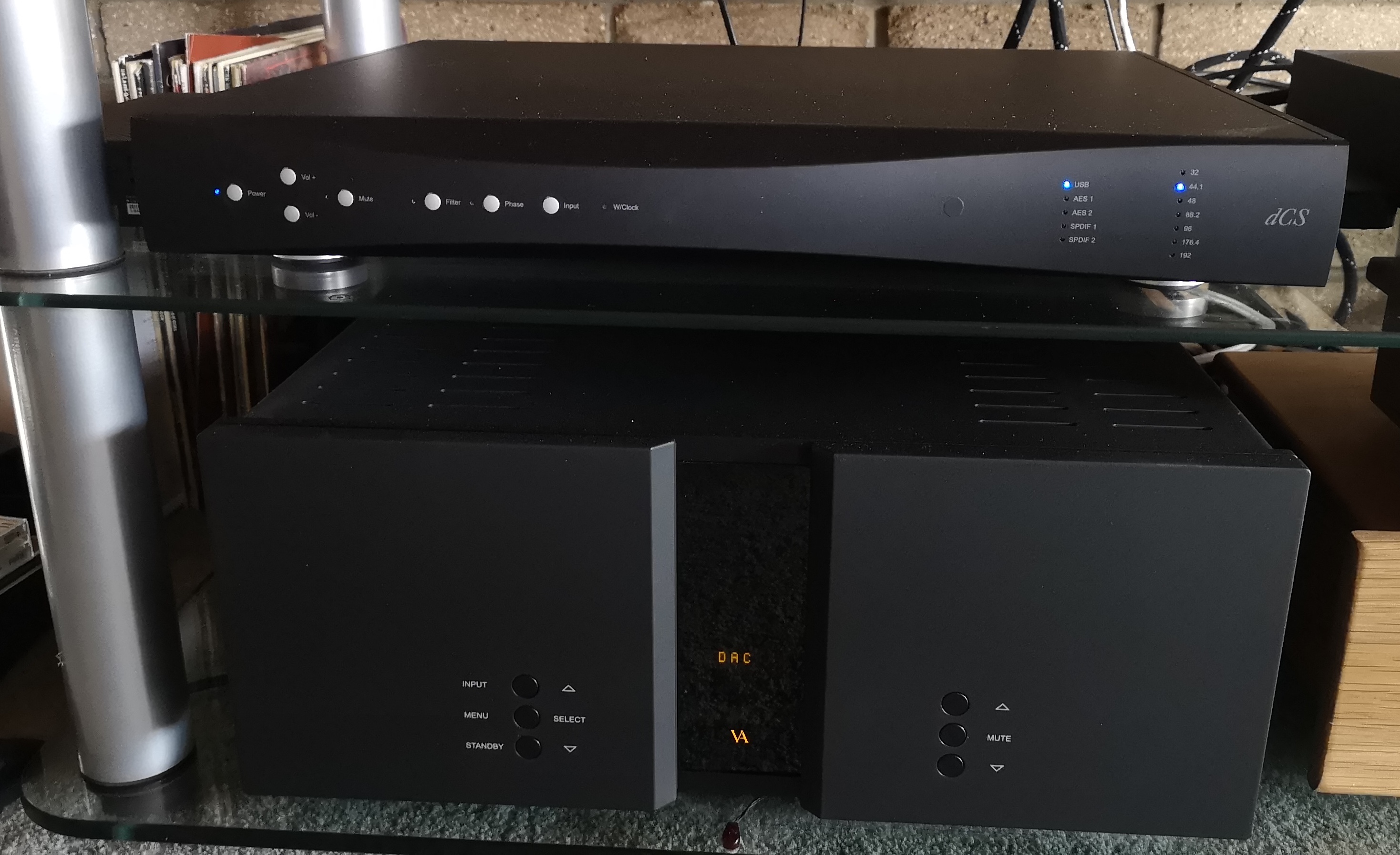 Over the past 3 years as the system has evolved (Vitus RI-101, Melco N1ZS/2, dCS DAC, B&W speakers etc) I have suggested recommendations for ways to further improve performance with more Entreq, some of it new, some of it used. Every time something was added the system responded in a really positive way. Fast forward to today, the original Silver Tellus has been part exchanged and the customer now has 2 x Tellus 2 ground boxes and the flagship Olympus Infinity as well. A couple of Silver Minimus were added as you can see below in the image below, but they were part exchanged when the Olympus Infinity was added.

The Olympus Infinity is connected to the Vitus RI-101, Melco and dCS DAC.

The second Tellus 2 is used to connect to the negative outputs of his Vitus amplifier (using the 2 outside posts) and the centre post is connected to the router for Qobuz streaming. There are also 3 Challenger 3V power cables on the Vitus, Melco and dCS.

That’s a fair bit of Entreq for anyone, never mind someone who was so sceptical when I first brought it up with him, but it just goes to show how beneficial it can be when done properly! 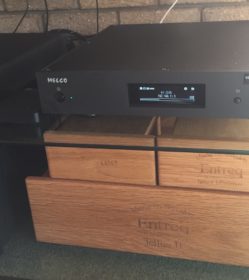 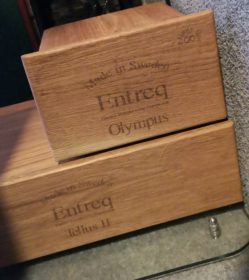 So, when he recently asked about the Sonos integration and we realised some of his cables would need re-terminating to make it work, the customer felt it was perfect timing to get them upgraded to the latest Infinity versions whilst they were away in Sweden anyway

When I collected the cables the customer joked that he probably wouldn’t hear any difference without them in the system. A few days later the customer sent me an email saying he was definitely missing what they were doing and the system wasn’t performing to the same level it normally does! I’m never one to say I told you so……After a couple of weeks the cables were returned and installed back into the system the customer sent me another email about how it good it was now sounding and he very kindly put his feeling/thoughts on paper for me.

Whilst I have known David for many years, and he has always been the source of tremendous advice, grounding my audio set up always seemed just one step away from ‘snake oil’! David knows clearly how I have felt over this and has never pushed, but rather quietly lent me a ground box and a cable, and then when I have had to admit the system has sounded a lot better with it than without it, he has lent me another bit!!  In this way I now have quite an extensive Entreq collection and a system that sounds fabulous.

Ninety percent of my listening is to classical music which in itself does not easily lend itself to A:B comparisons when upgrading.  Add to that that the benefit of Entreq only really comes into its own when the components have been in place for 24 hours or so, adding further to the difficulty of A:B comparisons.  Where you do notice the difference however is when you remove some Entreq from the system.  This I had to do recently as I was changing the setup a little to allow me to link my Sonos system throughout the house to my main hi-fi. To do this I needed to get the connectors on 2 of the ground cables changed by Entreq.  The 2 cables were removed and David took them to return to Entreq so the job could be completed.  This meant I was going to be without the cables and the role they play in my system for just over 2 weeks.

The obvious question therefore was when you remove 2 components from their ground box does this effect the ‘listening pleasure’?  The answer is very much yes!!  Was the sound suddenly awful?  Absolutely not, the overall system is too good for that!  Nevertheless, the difference was very real and the change was negative.  The sound picture was a little less full, the sound stage all a little less wide, in fact choose any well used ‘HiFi phrase’ used to describe a wonderful new component and the system had lost a bit of that!

One of the cables was an Apollo and the other an Atlantis.  As there were going to be away for a couple of weeks there was the possibility of having the cables upgraded to the latest ‘Infinity specification’.  This is something that Entreq offers as a cost effective upgrade path for those with older cables – It seemed too good an opportunity to miss.  David arranged for the cables to be upgraded to Infinity whilst they were away, this time the instigation coming from me!!

And after a little more than 2 weeks David was back in touch offering to refit the cables – the offer couldn’t have come a day too soon!  Five minutes and the cables were back in  place and all that was left to do was to allow the system to play and the newly upgraded cables do their thing.

Again it was not possible to do an A:B comparison. Nevertheless, extensive listening after being without these cables and therefore the Olympus Infinity they were attached to left me in no doubt of the valuable role they play in our system.  The overall sound was clearly back as was the better 3 dimensional sound stage.  But there seemed to be much more too.  Listening to some pieces which we return to time and time again it clearly sounded better than without the cables and that was an absolute difference.  The thing that surprised me more was how much better it sounded than before the cables were upgraded.  Clearly this is a comparison ‘from memory’ and always subject to variables and interpretation but I have to say seems quite outstanding!  It was as though the dynamic range has been increased – staggering!!

Bearing in mind how sceptical I was about the idea of grounding in the first place, I firmly believe that we have made very real improvements in the system by using it and by introducing it step by step.  And the cable upgrade?  Probably the most cost effective change we have ever made to the system! 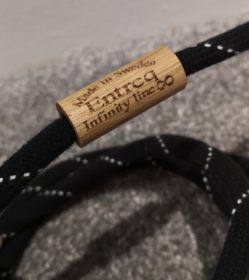 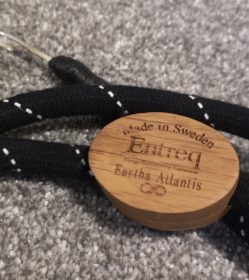 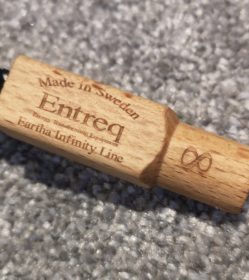 Anyone who has been watching Entreq from the sidelines and would like to try some in their system please get in touch, or if you are an existing Entreq owner and you would like to either upgrade your existing ground cables to Infinity (only Apollo & Atlantis can be upgraded). Part exchange is welcome as well, so if you have Challenger and you want to step up to the Infinity version we can work out a price to ‘swap’.

If you want to make your music more involving and engaging with increased levels of clarity whilst remaining natural and calm with inky black levels of quietness Entreq could be just the thing! 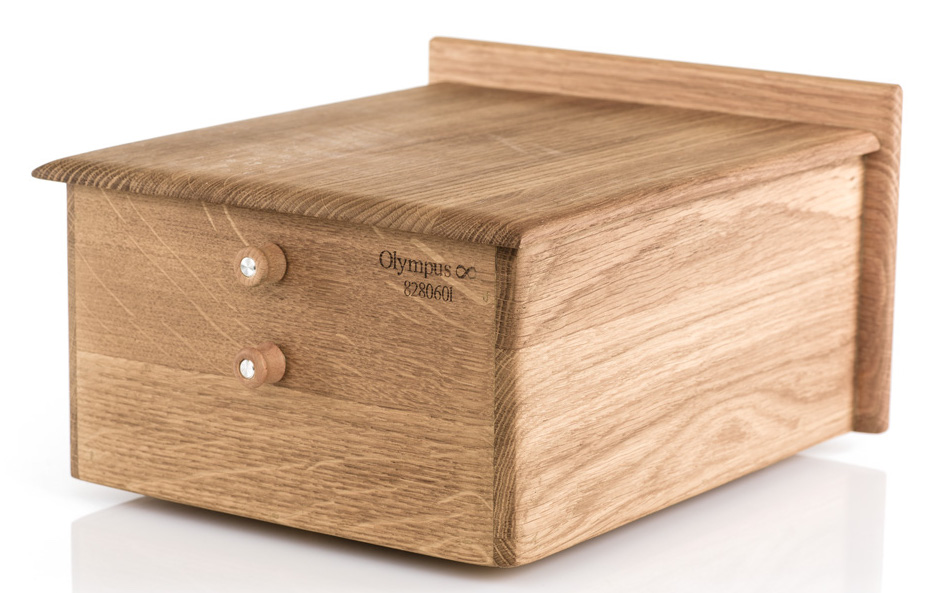