Skip to content
Home/Latest News, News, VTL/An Integrated Amp to Seduce You? Say Hello to the VTL IT-85!

An Integrated Amp to Seduce You? Say Hello to the VTL IT-85!

VTL stands for Vacuum Tube Logic and they have been producing products for in excess of 20 years now. They are based in Chino, California and have incredible heritage and reputation within the industry. When looking at online at blogs and social media photo’s of big systems from across the world VTL amplification in one form or another is a reasonably common occurrence and for good reason. Also there are a considerable number of brands who use VTL in their own demonstration rooms as well which is a brilliant complement to them.

Headed up by the incredibly talented Luke Manley (Luke is a top guy and a pleasure to spend time with as well!) his passion for music and all things tube based has led to a truly superb range of pre-amps, power amps and phono-stages – all designed to do one thing, reproduce music in the best way they can. My main brand page on VTL goes into some detail on why they use Tubes and why they sound the way they do.

The IT-85 integrated amplifier was a relatively late arrival to their product range, VTL were always best known for their ‘separates’ and never produced a one box amplifier before. It was conceived as an amplifier that delivered pre-power performance, but in one chassis, and a compact one at that. Essentially the IT-85 is their TL2.5 preamp and ST-85 power amplifier combined together in one box. Priced at £6600 it offers a genuine slice of real high end performance without being eye wateringly expensive (relatively speaking!)

The IT-85 measures 400mm wide x 280mm tall  x 177.5 mm deep so it doesn’t take up a lot of shelf space. It terms of design it looks great, the build quality is first class and in some ways it almost looks retro. It is a fully cased amplifier with no exposed valves, but you can still see that lovely glow from the complement of valves, the top of case does run rather warm and it does need a few inches of clear space above it.

Weighing in at the best part of 28Kg it is reassuringly heavy, all the more so when you see how compact it is. 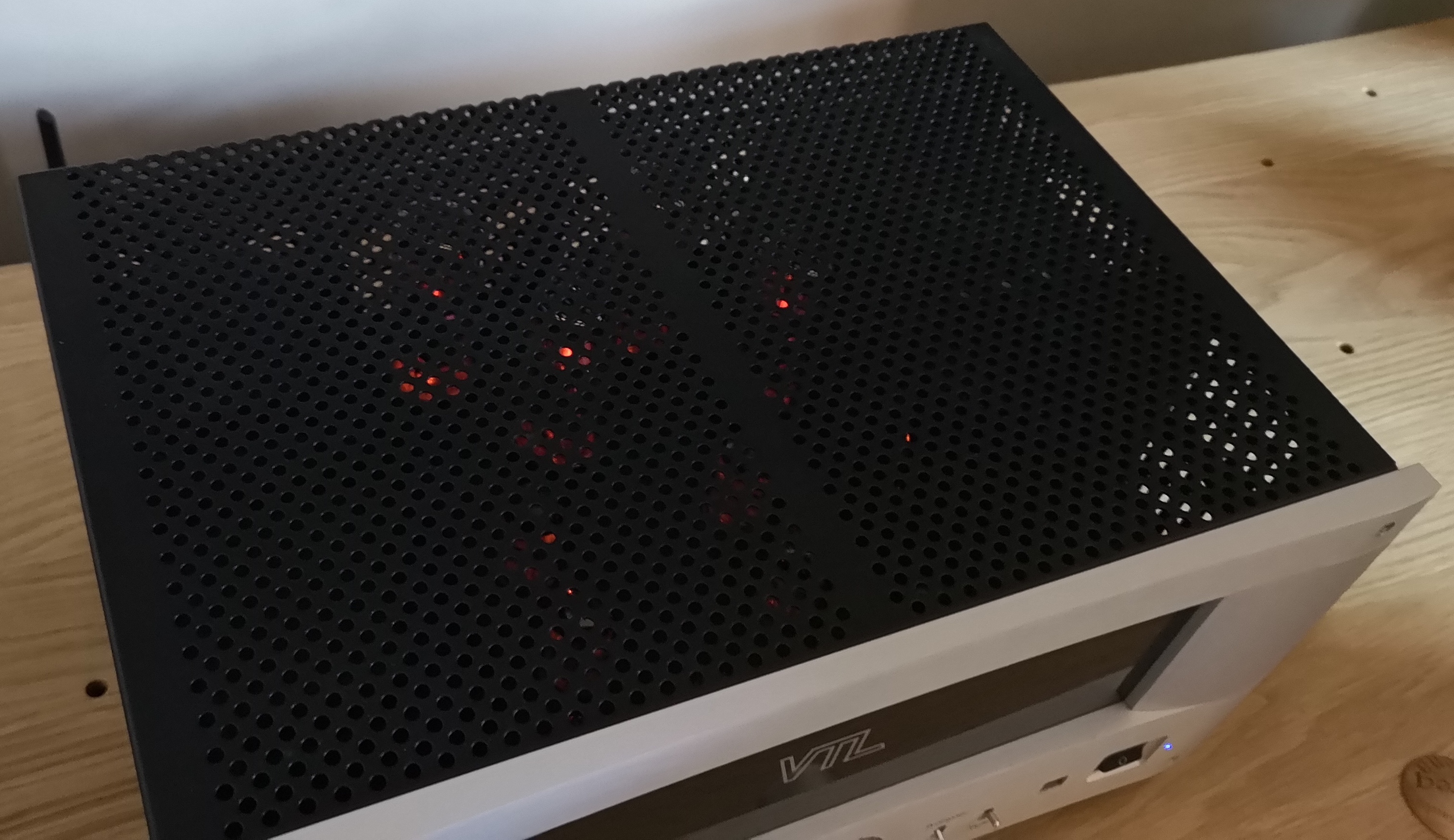 Connectivity is extensive – there are 5 pairs of RCA line level inputs, there is also a Processor RCA input meaning you can use the IT-85 in conjunction with a Home Cinema amplifier without compromising music. There is a pair of RCA pre-outs and an RCA tape output as well. The speakers terminals (made in house – now there is some attention to detail!) are very conveniently sited at a 45 degree angle on the back panel, which makes leaning over the amp to connect up speaker cables nice and easy!

On the front panel there is a 6.3mm headphone socket as well. Serious headphones listeners are becoming more and more popular these days, after all it enables high quality late night listening without disturbing the neighbours! Headphone users will be pleased to hear that this socket is not a mere afterthought as is often the case with many amplifiers, the headphone output is driven directly off the tube output stage and output transformer of the power amplifier section, so when you are listening to headphones on an IT-85 you are getting all the performance of the IT-85 itself! 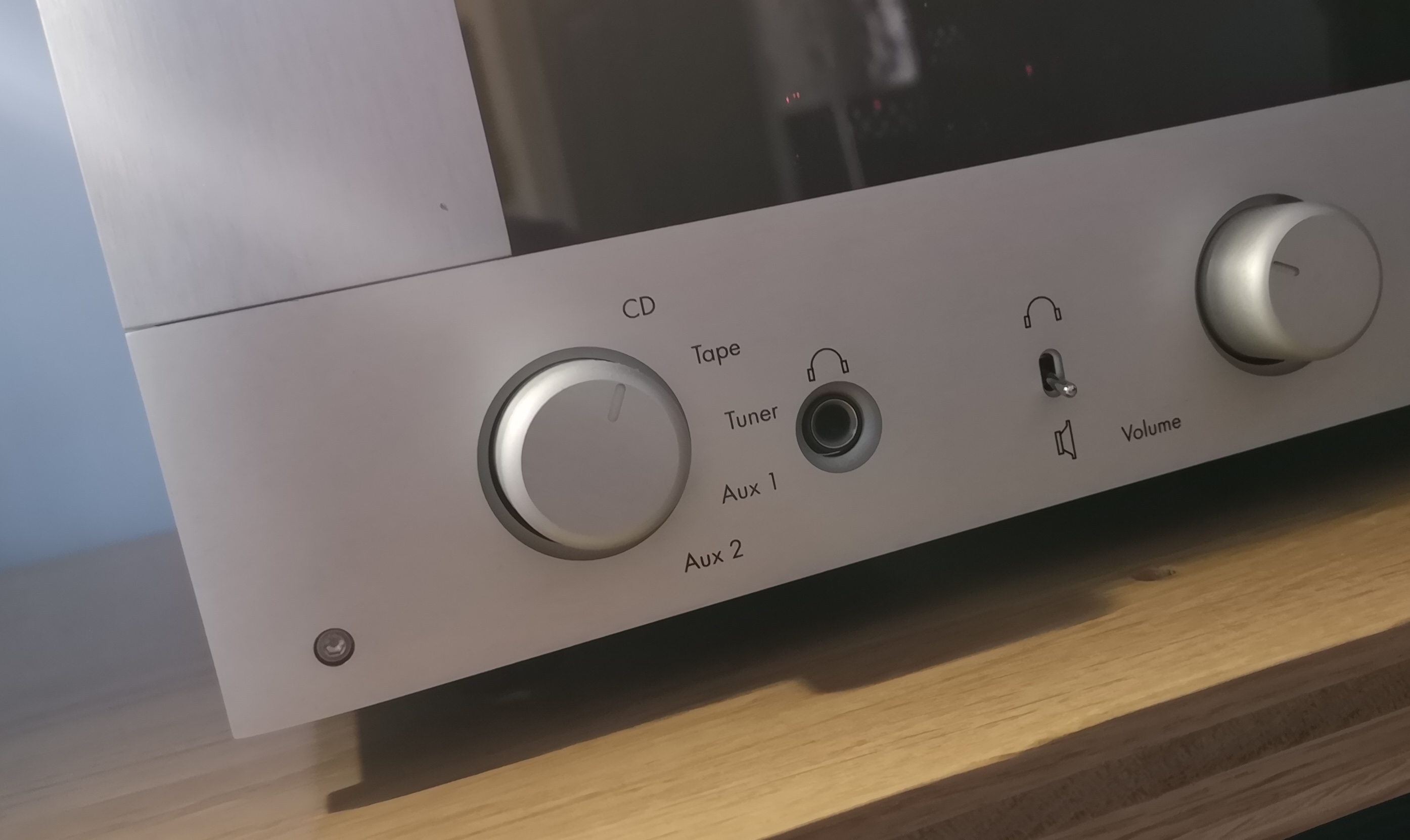 Power output is conservatively rated 60 watts per channel in it runs in tetrode mode, 60 watts is a lot of power in the world of tubes and is certainly plenty to throw around a typical UK living room.

My new demo IT-85 arrived a few weeks ago and I’ve quietly been getting some hours on it, not paying it too much attention either to be fair. After it had run for the best part of a couple of hundred hours I finally sat down in front of it for a session. Initial impressions were that it simply sounds like a VTL amplifier – which is no bad thing!! The mid-range is open and as sweet as you could ever want, high frequencies are extended, liquid smooth and ever so alluring. Bass extension is tight, extended and incredibly well controlled – there is no hint of fat, wooly, ploddy bass that many tube amplifiers are guilty of delivering – this is down to the fact the IT-85’s tranformer has been configured in a particular way to ensure there is no saturation in the output transformer – which leads to distortion and noise. It makes the ‘VTL sound’ more accurate than other tube amplifiers and effectively less tube like.

The EL34 output tubes used here arguably don’t produce the same impact and slam as you get from the 6550 tubes you get in an ST150, but I never felt the IT-85 lacking in any way. Crank the volume excessively on a big demanding pair of speakers and you’ll remember that you are only listening to a 60 watt amplifier, but using appropriate loudspeakers (don’t try this with a pair of Avantgarde Horns or a big pair of Wilson’s) in a normal sized UK room it delivers it enough output with headroom to spare combined with a simply magical presentation. If you need more it’s where the TL2.5 and ST150 come into play!

VTL have really got the balance of the presentation just right with the IT-85, it is sweet and tube like with the top end and mid range, but the bass sounds solid state through and through. Listening to a wide variety of music, some simple and some very complicated the IT-85 remained composed, articulate and ever so insightful. From Radiohead to Crowded House via Penguin Cafe and Kamasi Washington I simply kept getting drawn into the music and one more track quickly turns into a whole album which says a lot about a product. 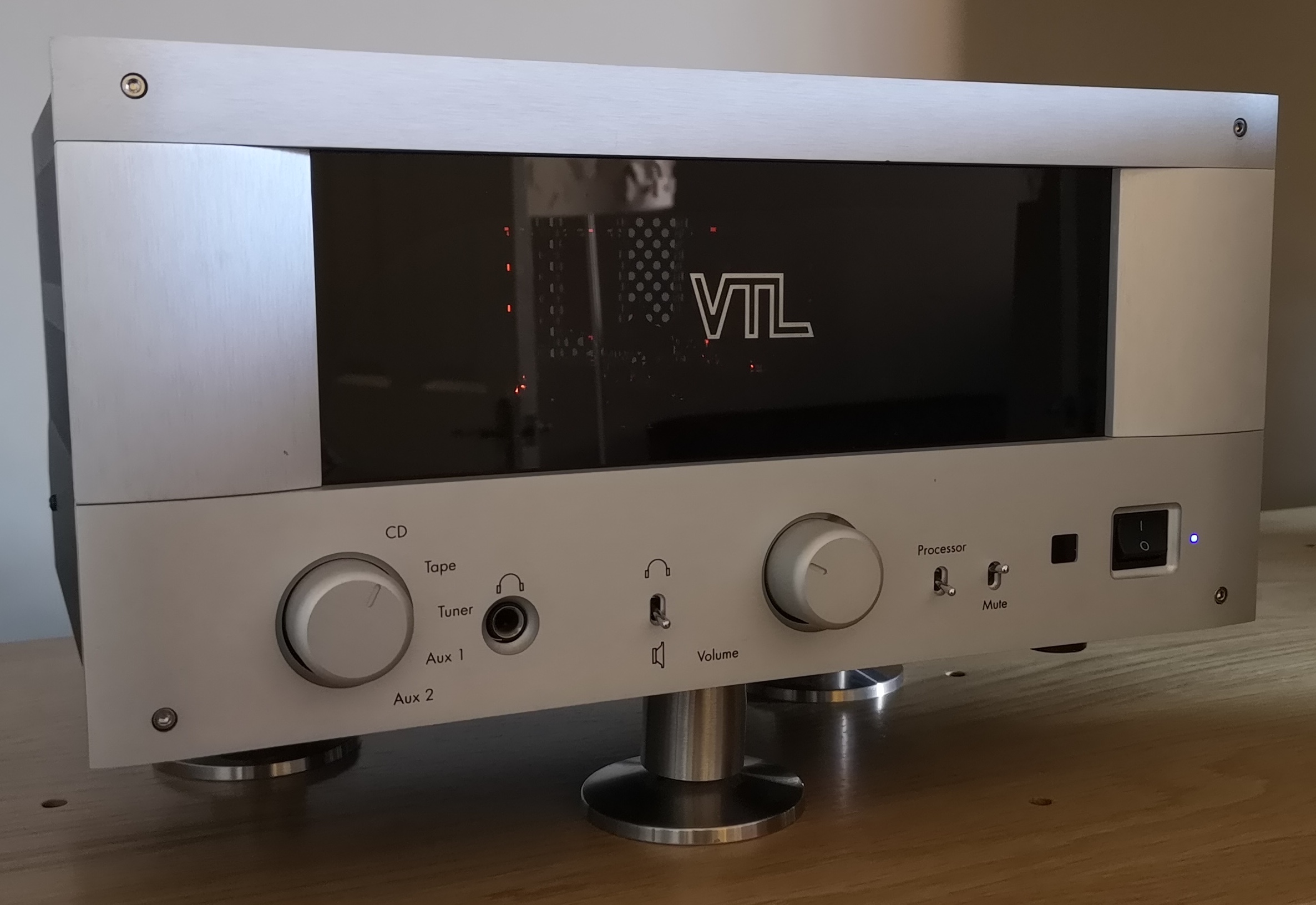 Installing some Stillpoints under the IT-85 further improves what it is capable of delivering sonically as well, I used 3 Ultra 2 under it and there was an instant uplift in every aspect of the performance, things sound even more real and alive and amplifier itself almost takes a back seat and the music takes centre stage. I also added an Entreq ground cable/box to the amplifier as well and after a couple of hours of being connected there was more refinement and naturalness to the sound, typical Entreq in terms of making things calmer with greater levels of texture, increased tone and even less noise. In both cases the benefits were not subtle and very easy to demonstrate – great potential for future upgrades to a system to allow it grow further when budget permits.

The IT-85 almost sits at a crossroads in some ways. You could easily build around it with the IT-85 being the single most expensive item in the system and you will get brilliant results – I ran it with a Melco N100 (£2000) and an Exogal Comet Plus DAC (£2950) and a pair of Serhan & Swift Mu2 loudspeakers. But by changing these to a Melco N1ZS EX and the Vitus RD-101 DAC (collectively £20,800) the IT-85 responds magnificently and the system simply sounds bigger and more expansive as a result, it just shows you what the IT-85 is capable of delivering when you treat it right!

If you are looking for a new integrated amplifier at around this sort of price point (and beyond) it would be well worth the time and effort to have a demonstration of an IT-85, it’s very unlikely to disappoint and highly likely to put a smile on your face, it really is a great performer.

Priced at £6600 and available for demonstration now. Please get in touch for more info