Melco have been the go to choice for music servers here at Audio Therapy for the past 3 years and for good reason, at each step of their range they offer superb performance, great features and functionality and are really ease to use.  With the 3rd generation of machines now upon us with the all new EX software and the Melco Intelligent Music Library the functionality has now improved even further.

The N1A has traditionally been the entry level Melco model  has been incredibly popular, but last year Melco launched the half width N100 to sit below it in the range at a new entry point. The N100 visually matches the D100 Optical Drive, E100 Expansion Drive and the new S100 Dataswitch. Priced at £2000 the N100 is a brilliant product, build quality is fantastic and the architecture and software that drives it is identical to all the other Melco models, this is no half-measure compromised machine and it has won plenty of awards since its launch. 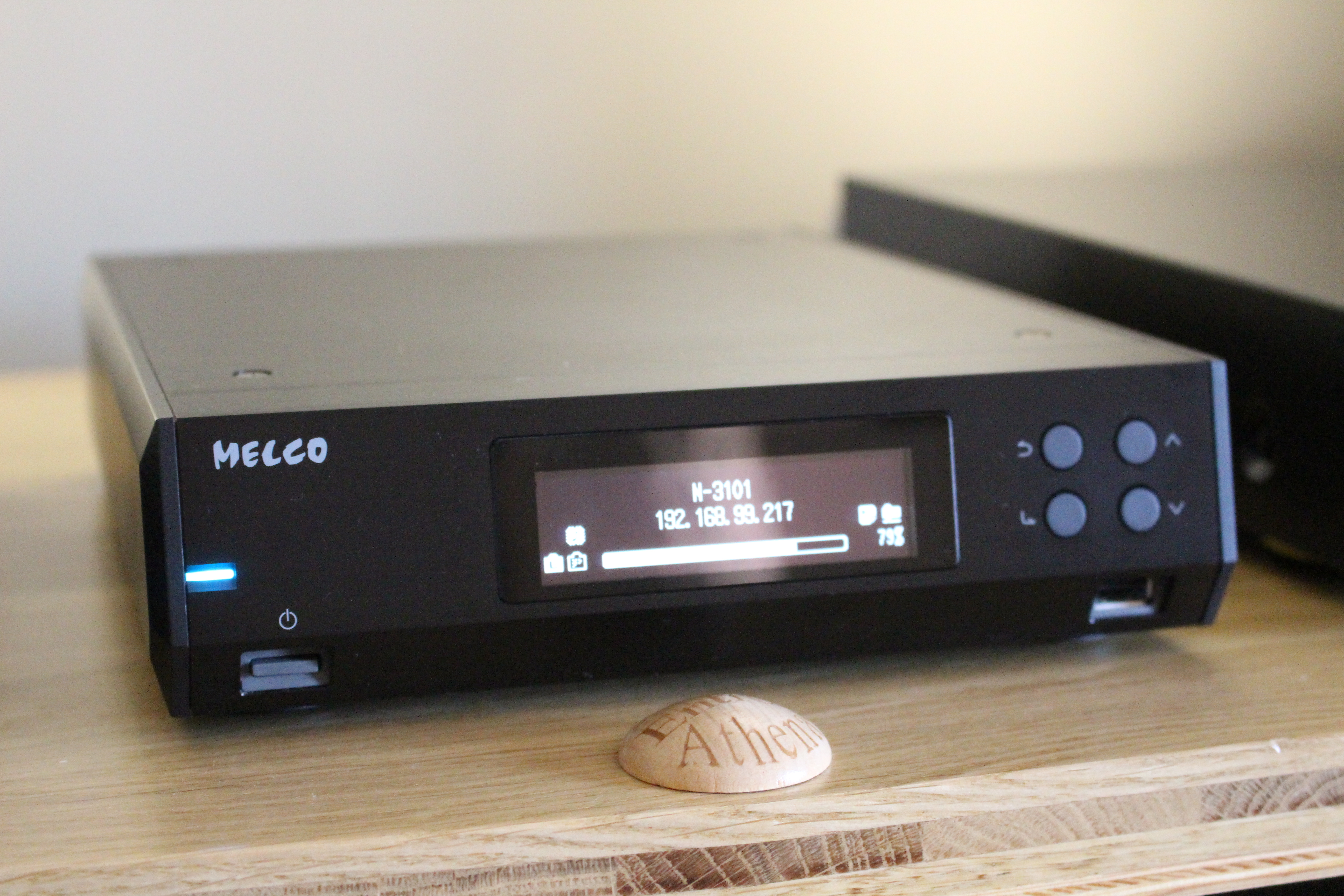 The N100 features a single 2TB hard drive, mounted in the same anti-vibration hard drive cradle you will find in the much more expensive N1ZH, N1ZS and N10 machines, this cradle is designed to ensure the hard drive is isolated from vibrations and to help offer the very best performance. Whilst a 2TB drive may seem small for storing music these days in reality it is plenty for most people’s collections.

A 2TB HDD will easily hold the best part of 3500 albums, downloaded HD music takes quite a bit more space than conventional CD’s so that can eat into the storage somewhat but 2TB is fine for most users. An as an example I have a folder on one of my demo machines with 132 HD albums, this folder is 155GB in size so it is more than double the space of conventional CD rips. 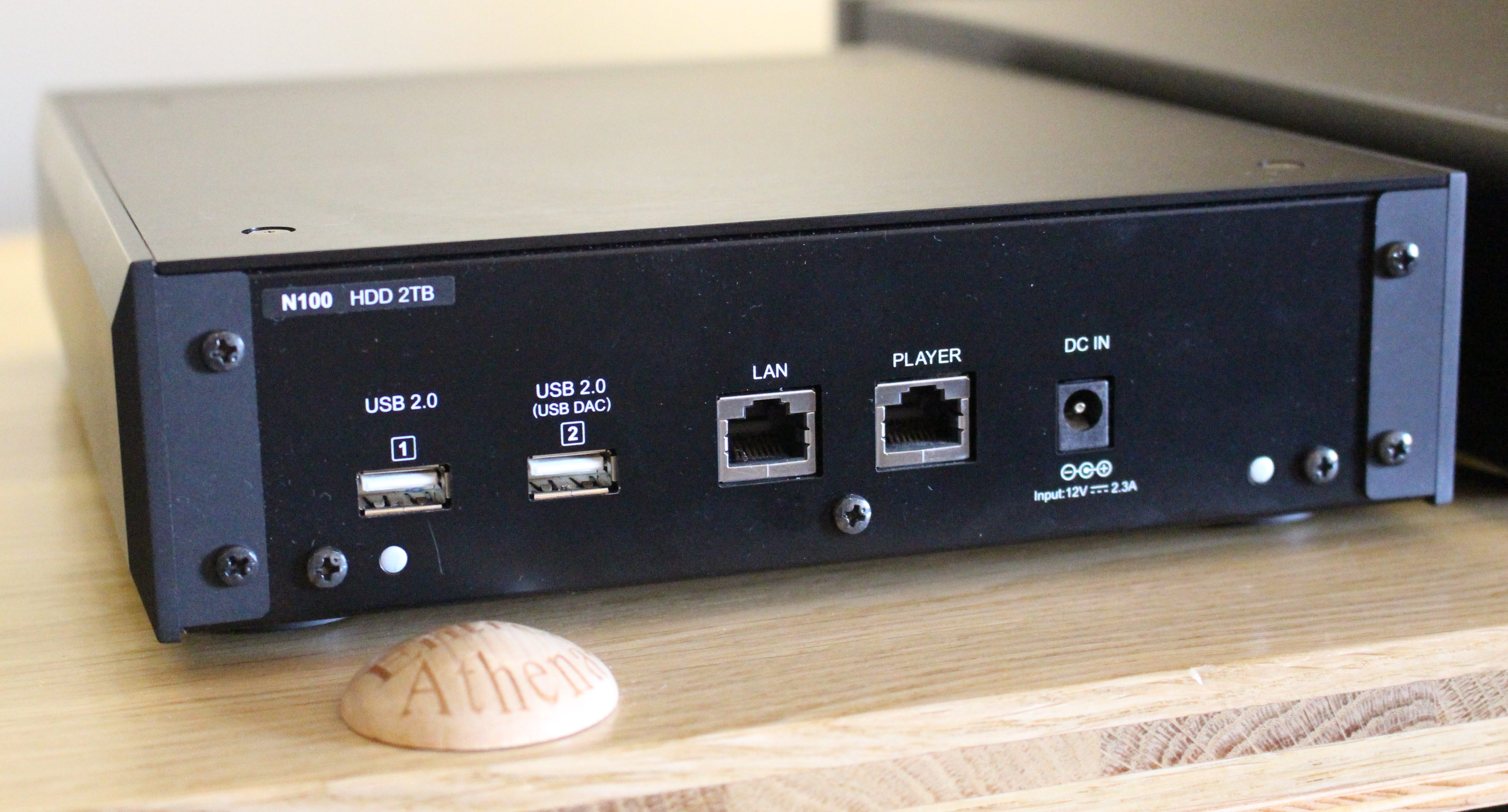 In terms of connectivity the N100 has 3 USB sockets, 1 on the front panel and 2 on the rear, one of the rear sockets is a dedicated USB-DAC connection. The other 2 USB sockets can work in a variety of ways, when you connect a drive into them the front panel asks how you want to use the connected drive, to import music from, to use as a back up or to act as an expansion drive, nice and easy.

As with all Melco’s there are 2 ethernet ports on the rear panel, the LAN port is for connecting to your network/router. The second port is the player port, if you are using a network player instead of a USB-DAC (like a Naim ND5XS for example) you connect your Naim to the Player port and the N100 acts like a switch and isolates the Naim from the network, it still has full access to the outside world, but it is isolated from noise and pollutants on the network to help improve performance, it’s a great function and it works really well.

The N100 is now shipping with the EX software platform installed (FW 4.01 currently) so you have Minimserver 2 and SongKong pre-loaded as well as Internet Radio. The versions of Minimserver 2 and SongKong that come included are starter editions essentially, they give you plenty of functionality but to unlock the full suite of features each program offers you will to need purchase a licence for them both. This is the same for all Melco models and it’s well worth doing.

If connected to a USB DAC you have the option to stream Tidal and Qobuz music services as well which opens up a a whole new world of music to explore, both services offer CD quality streaming and beyond.

This is where it all started with Melco, the N1A was the very first model they released and it has evolved from mk1 to the mk3 with the new EX series. Priced at £2749.00 the N1A EX comes with 2 x 3TB hard drives, they can be configured to run in 3 different ways

Spanned Array – 6TB of storage with no redundancy

Raid 0 –  6TB of storage with no redundancy

Raid 1 – 3 TB of storage with a mirror image on the second drive (this is not a back up!)

The spanned array option sounds best, it’s the only option I use when installing Melco for customers, some people like the idea of Raid 1 as it gives them a mirror image of their music, however, this is not the same a proper back-up! External USB storage is not expensive these days and keeps your library safe! Use the USB Back Up socket – it’s there for a reason!

In terms of connectivity the N1A offers 5 USB ports (1 on the front and 4 on the back). The 4 sockets on the rear are dedicated USB DAC, USB 3 (for import or ripping CD), Expansion and Back Up. The front port is USB 2 and can import, rip but at a slower speed than the USB 3 port on the back. This socket could also be used for a DAC connection if required.  As with the N100 and the all of the other Melco models when connected to a USB-DAC you can stream Tidal/Qobuz.

The N1A also has the same network connectivity as the N100, so there is both a LAN port and a Player Port. The N1A uses the same firmware as the N100 and comes with the starter versions of Minimserver 2, SongKong and Internet Radio as well.

Format support is extensive and all Melco models support up to 32-bit/384kHz PCM and DSD512. They will automatically down-sample to the maximum supported resolution of the connected DAC as well.

In terms of controlling a Melco there are plenty of options, if you are using a Network Player in conjunction with the Player Port you simply use the app for your player as you always have. If you are using a USB-DAC there are several options, Melco’s own app (iPad only), Linn Kazoo, Lumin, Bubble UPnP (Android only), Hi-Fi Cast (Android only) are the most popular choices, they are all a little different from one another but essentially do the same thing. 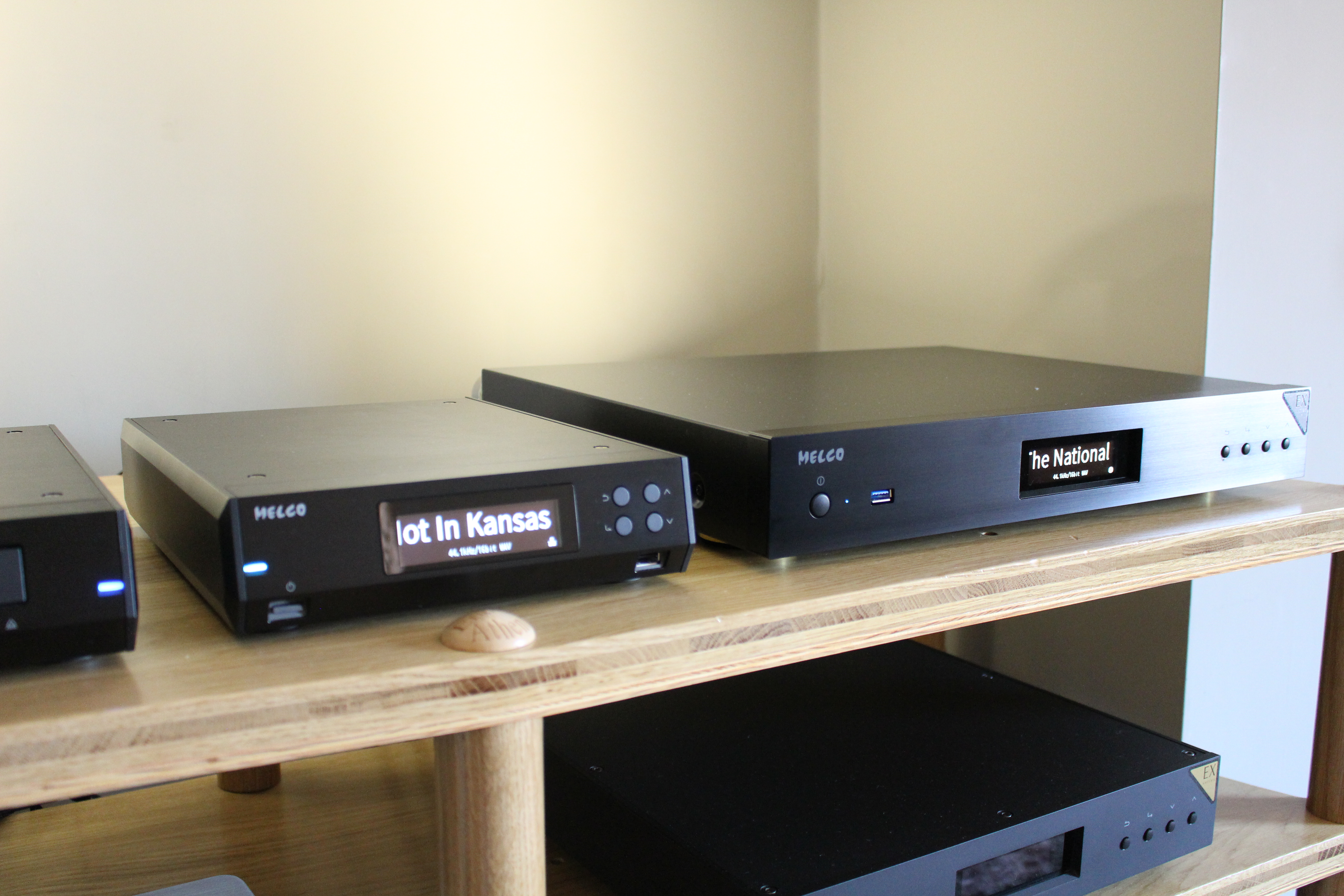 In performance terms there is not much to tell the N100 and N1A apart when you compare them together in the same system. I set up a system using an Exogal Comet Plus DAC connected into a VTL IT-85 integrated amplifier for testing.

Both models sound very clean, refined, musical and ever so natural in the way the music is presented. They certainly are not forward or strident in the way they play music and never become fatiguing when listening for long periods of time, even with poor recordings. They are both extremely quiet as well, that old hi-fi cliche of an inky black background behind the music is ever so apparent here.

I also used a Macbook Pro running Audirvana as well with the same music stored on the Mac. Both Melco’s sounded consistently better than the Mac did, Audirvana didn’t sound poor, far from it, but there was simply less going on in the music to be engaged by, there was less texture in the bass response and it almost sounded a bit one-note and ponderous in comparison which was almost masking the finer details and nuances in the tracks compared them playing on the 2 Melco machines.

There is no right or wrong answer to this question, I speak to lots of different customers all coming from slightly different angles, all with varying levels of experience with digital audio and stored music and of course different systems.

Someone with a significant CD collection would be possibly better served by an N1A due to its larger capacity, whereas those who have much smaller collections of physical media could save some money have go for an N100. HD downloads also play a part, at an average of a 1GB per album (some can be a lot more) it won’t take long to eat into the capacity of any hard drive.

I have a plenty of customers with both machines using them to great effect in their systems.

Examples include someone who has a small system in a home office, it’s not the biggest room in the world so an N100 (connected to a Chord Qutest DAC) was ideal as it takes up less space than an N1A.  Another customer uses an N100 with an Exogal Comet, the N100 was chosen as he simply using Qobuz for streaming everything, he barely has 20 albums on the hard drive. He tried a variety of streaming sources prior to choosing the N100 and is comfortably won out to his ears over the others things he tried.

I have several customers who have very large CD collections so for them an N1A makes more sense than N100 as they would easily fill the hard drive just with CD rips never mind HD downloads!

If you have a decent sized CD collection the D100 is also worth serious consideration, you’ll get good results by connecting an conventional USB CD Drive, but a D100 consistently gets better results. It often raises an eyebrow and I’ve had the ‘surely bits are bits’ conversation more times than I care to remember, but everyone who has tried a D100 has been impressed enough to buy one.

I keep the N100, N1A and D100 on permanent demonstration (along with all the other Melco models) so if you would like to try one in the comfort of your own home and system please get in touch. With current circumstances and social distancing I have been shipping more items out than ever over the past month. Even when lockdown has finished home loans are no problem at all.

If you have any questions relating to Melco please do not hesitate to get in touch. 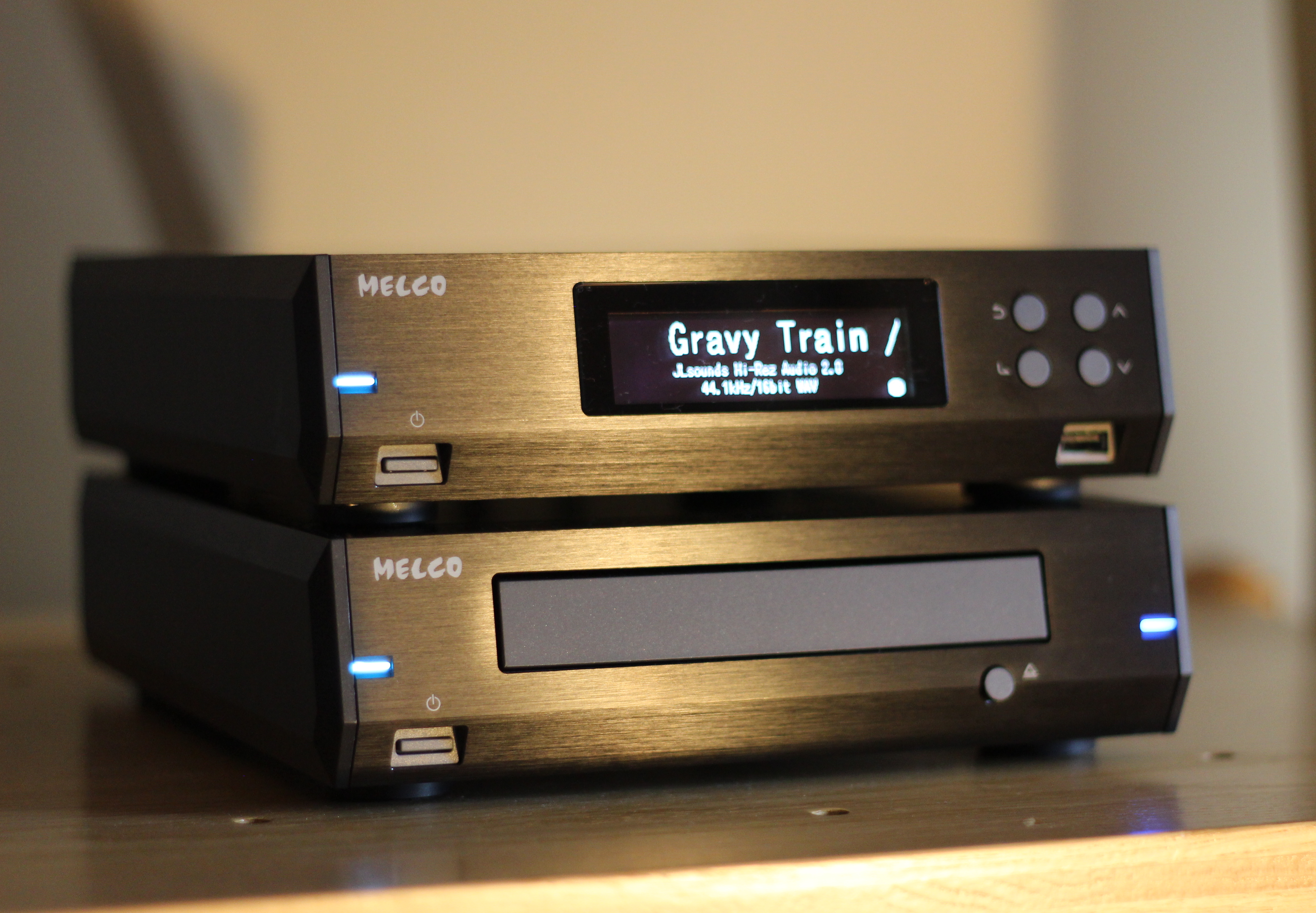