The UK and European Distributor of Melco, have come up with a brilliant box of tricks in the form of a Fibre Optic Media Converter (branded as Audiophile DOT) which essentially lets you interface your standard router to your Melco S100 Data Switch using one of the S100’s fibre ports.

If you have no equipment with Fibre Optic connections (few people do to be fair) you can get this Media Converter working brilliantly in your system with the use of their very clever Accessory Kit and it makes really positive impact on sound quality for streamed music.

Behind the 0’s and 1’s, hi-fi electrical signals are still analogue, and they are just as susceptible to noise and interference. This additional noise damages the integrity of the pulse edges which can result in timing errors and jitter. Using a high-performance audiophile data switch, such as the Melco S100, ensures that the data is as pristine as possible and switch management ensures that errant data packets are not presented to the hi-fi system. But, ethernet cabling is still the weak link, being connected to noisy IT-based devices through-out the home (such as Smart TV’s and Game Consoles), all the cables are effectively antenna, capturing EMC from the environment. Copper wire, used for Ethernet cables, is effective at conducting data, but is equally effective at conducting all manner of interference as well. 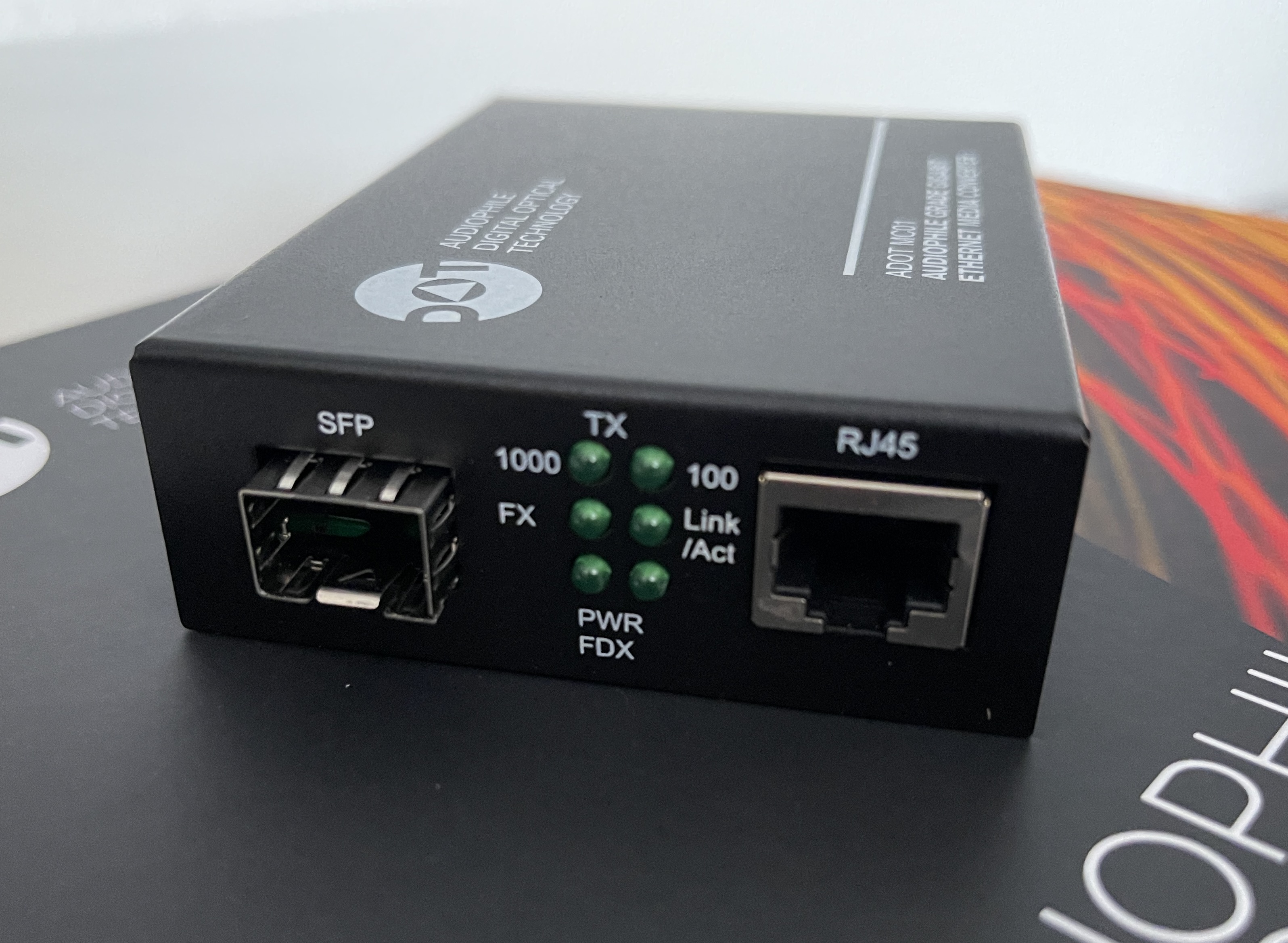 By breaking the chain from the router to the S100 (or the rest of the network) and using fibre optic instead of conventional ethernet the musical data is transmitted to the S100 without any interference and noise.

Several IT companies produce Media Converters that looks quite similar to one another including this one but I must stress that the ADOT Media Converter is not an off the shelf model that has simply been rebranded for convenience, it was designed based around the best aspects of 3 different media converters. There is the option to throttle bandwidth back to 100mb and in some systems this can have a great impact on sound quality, but if you use Roon or have a Linn Network Player 100mb can be unstable.  The SFP modules are also widely available and there is lots of choice and they are not all created equally, some of them are superb for helping to provide ultra fast stable networks, but some of these modules can very sound poor from an audio perspective and remove all of the advantages of connecting via fibre in the first place. The SFP modules used here are rebranded off the shelf ones, but are modules that have been carefully selected based on audio performance alone, many different modules were tested, measured and listened to. Modules are supplied in pairs and mixing modules is not recommended, best case is it won’t sounds as good, worst case it won’t even work!

In terms of connecting to an S100 it couldn’t be easier. Connect the Media Converter to your existing router using a conventional ethernet cable, you then take the fibre optic cable and the 2 SFP adapters connect them all together and connect one end of the fibre cable into the Media Converter and the other end into the S100. Power on and you are good to go! 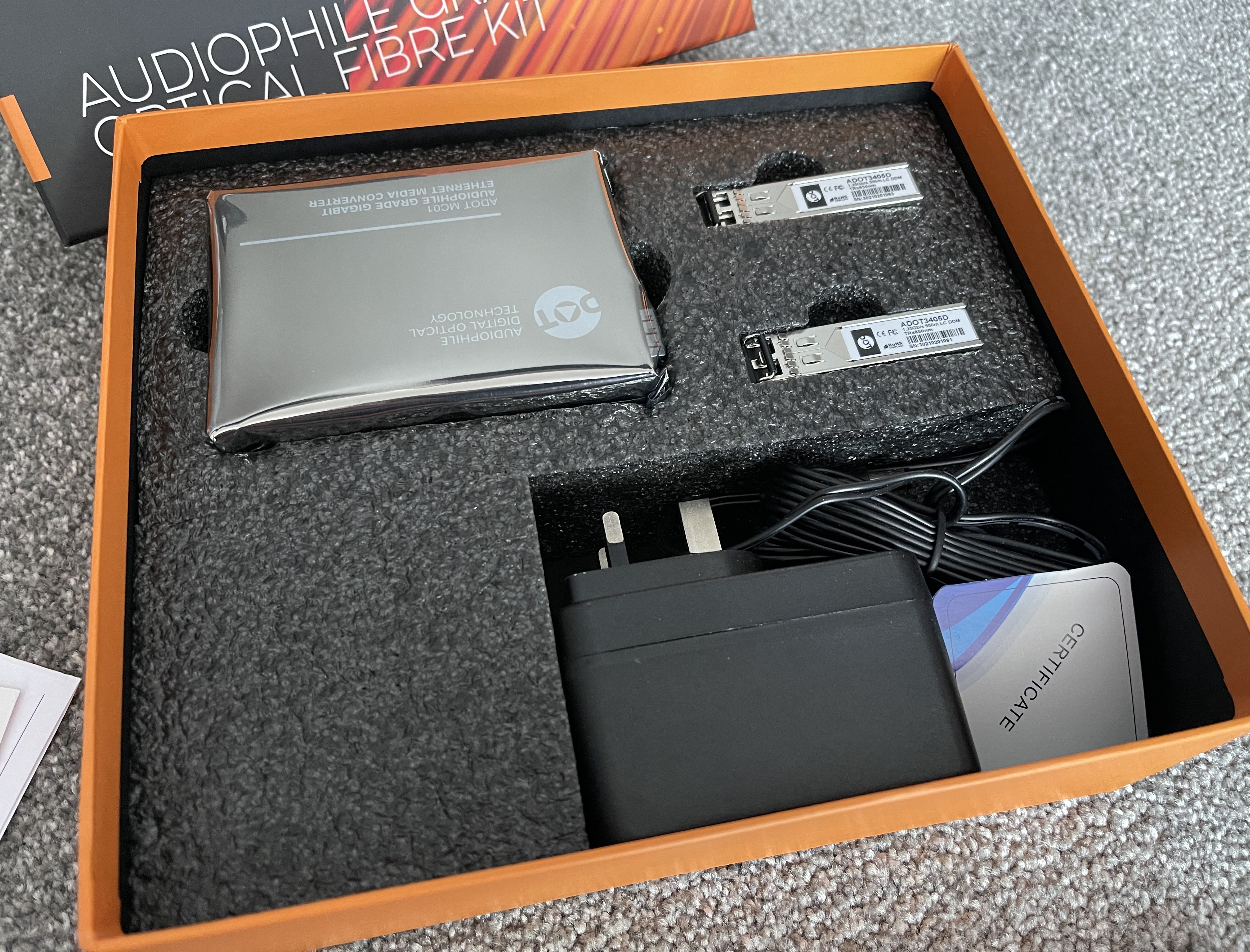 There are 3 different versions of the Media Converter available, the only things that differs is the power supply that feeds them.

Of course not everyone has an S100 and even fewer people have any equipment with SFP connections so you maybe reading this thinking it’s a bit limited but should you not have any SFP ports fear not! As mentioned above you can still take advantage of the benefits of fibre in your home network.

Audiophile DOT also produce something called an Accessory Kit which is available for £199.00. This kit comprises of another Media Converter, a 1m Melco C1AE Ethernet Cable and a splitter cable to enable you to power both Media Converters from one power supply. The fibre cable and SFP modules are not included in the accessory kit as they come in the primary kit.

I have an MC02 and Accessory Kit on demonstration (with a Plixir PSU coming soon) and when the MC02 is connected between my router and S100 the impact it makes when streaming from Qobuz is quite something, especially considering the relatively low price of admission for an MC02.

Over the past few weeks I’ve spent time listening to lots of streamed music from Qobuz (both directly and also via Roon) across a wide variety of sources at different levels such as a Melco N100, N1ZH and N1ZS all connected to a Vitus SD-025 DAC and RD-101 DAC via USB.

I’ve also done the same listening but with both Vitus DAC’s switched to their ethernet inputs, so the Melco’s are not in play, both Vitus DAC’s are standalone Network Streamers as well for those who didn’t know. 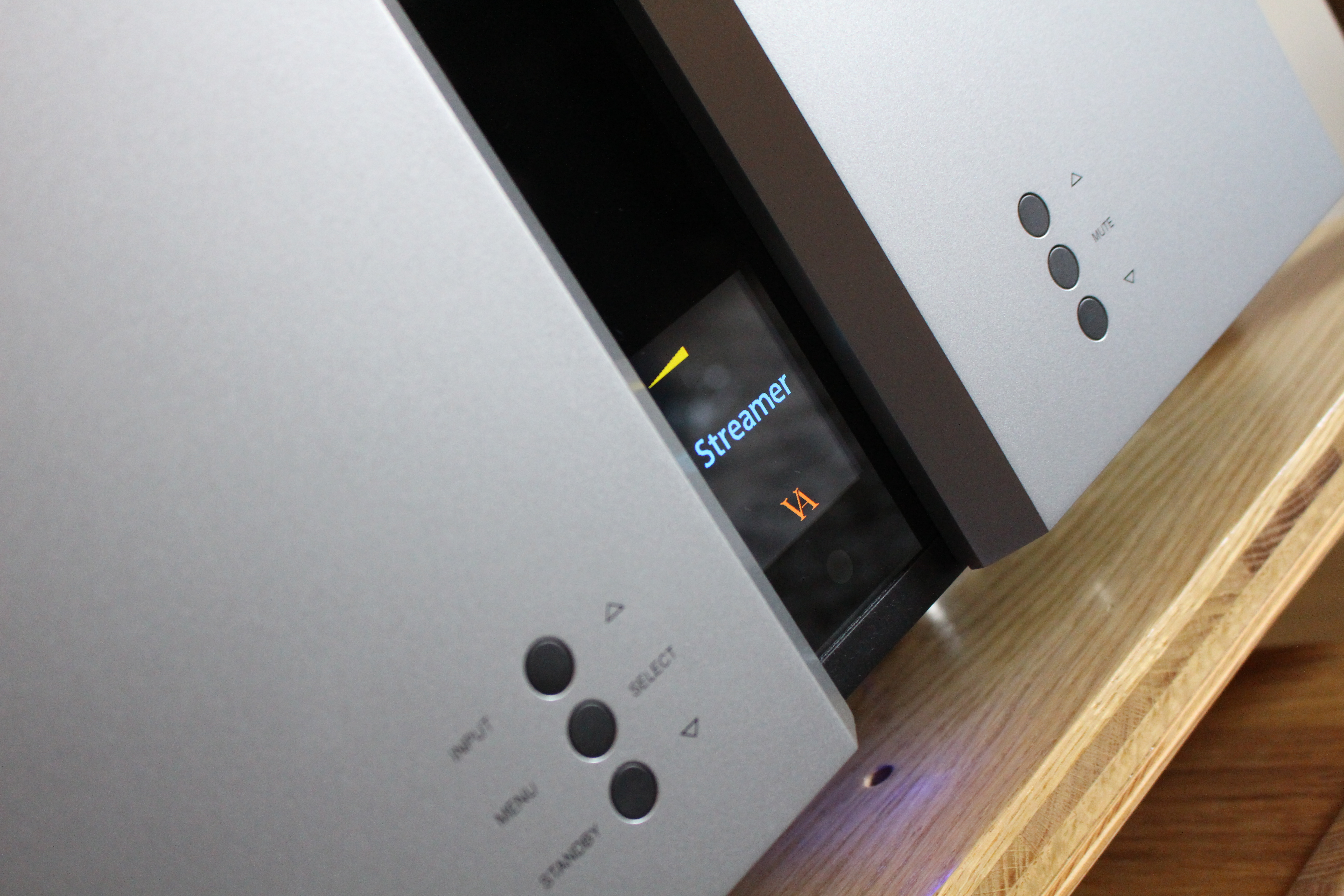 To be fair regardless of what equipment was in play it didn’t take a lot of listening to be able to hear the impact the Media Converter was having on musical performance. On one hand its impact is quite subtle but on the other it’s actually quite dramatic and it blurs the lines to some degree between playing streamed music vs playing music off a HDD (which typically always sounds better).

With the MC02 in play streamed music is cleaner with greater clarity and there is more subtlety and refinement to proceedings, the music now has more focus to it as well, going back and forth a few times over the duration of a couple of week solidified my thinking as well. Going back to ethernet it still sounds great, but the fibre kit is definitely making a positive effect on streamed music, increasing engagement.

I also removed the S100 from the system altogether and connected the MC02 Media Converter into the Accessory kit and then from there connected the Accessory Kit into the ethernet input on a Melco N100 and then an N1ZH and the SD-025. I also tried it on a modest TP-Link switch, listening to the same music pulled from Qobuz directly and also via Roon……more of the same. I can hear the impact the removal the S100 makes, but going back and forth between fibre and ethernet is again quite obvious. For someone with a sensible system who has invested money in a good network based source and streams music the price of a Media Converter and Accessory Kit is well worth the price of the admission to my ears! I’ve customers who spent more money on upgrades which are more subtle than this one!

As mentioned above I have Media Converters and Accessory Kits on demonstration and if you would like to try one in the comfort of your own system please get in touch. 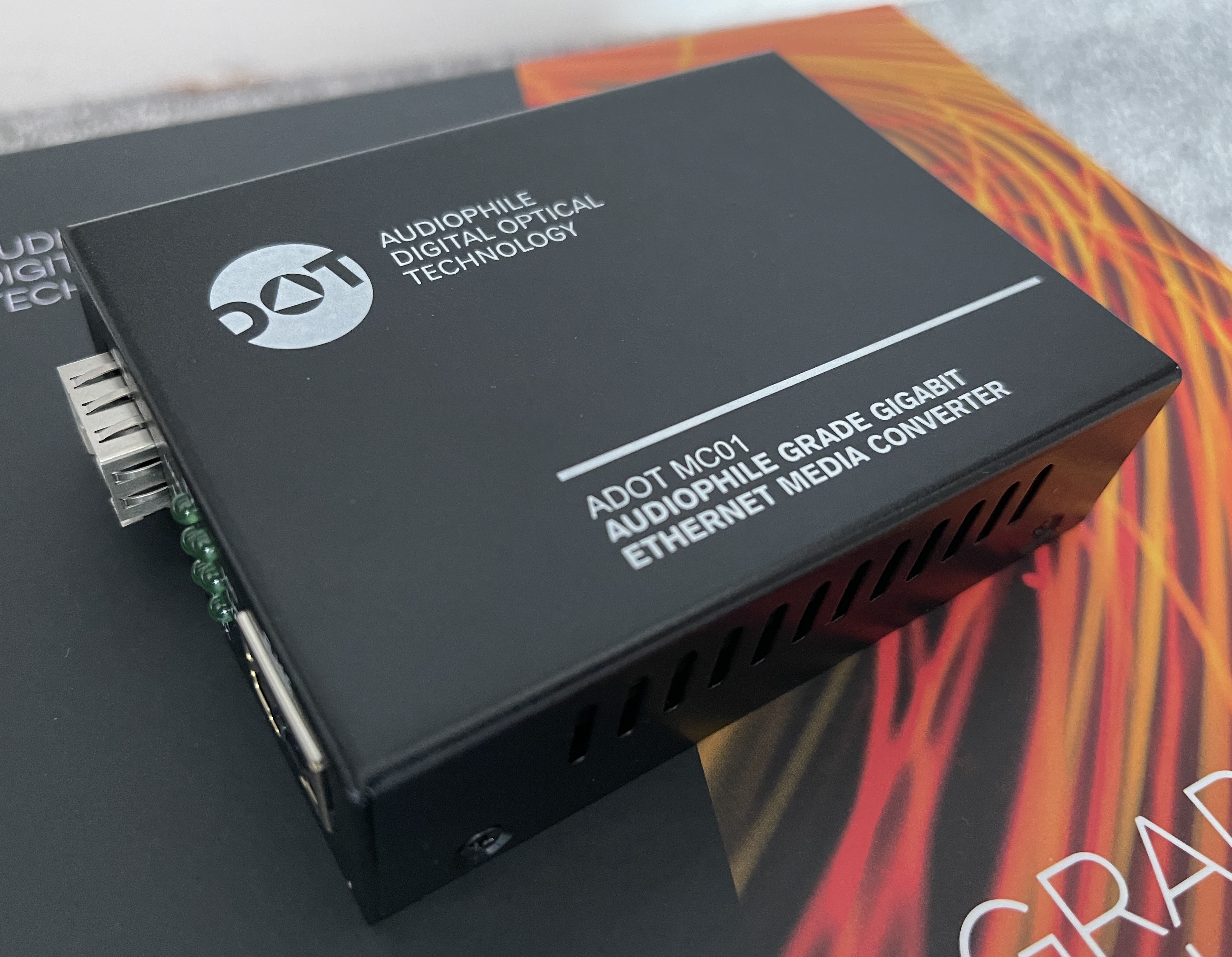