Visually, the RI-101 mk2 is identical to the mk1, there is nothing to tell them apart, it still has the additional cooling the original RI-101 gained over the RI-100 and connectivity is identical with 3 pair of XLR inputs, 2 pairs of RCA inputs, XLR pre-outs and speaker outputs.

What about under the lid?

When the SIA-030 launched in the Summer of 2019 everyone who heard it simply fell in love with it. Performance was off the charts, it is really is like no other integrated amplifier that I have ever experienced. It’s presentation is so musical and natural with spine-tingling engagement, it’s so quiet as well – that is one of the factors which gets mentioned the most, it manages to pull so much information out of the music, it really is quite something when you experience it with music you know really well.

In the time since the SIA-030 was launched it got Hans-Ole Vitus thinking and he essentially started experimenting with certain aspects of the SIA-030, scaled back and trickled down to work in their Reference range of products.

The subsequent experiment resulted in such a good sounding amplifier Vitus simply had to act on it and the RI-101 mk2 was born.

Once my demo unit had been wired up and left playing for 3 or 4 hours to warm up I sat down to have a listen to my usual go-to demo tracks from the likes of Leonard Cohen, Crowded House, Jon Hopkins, Matthew Halsall and GoGo Penguin to name a few. Right out of the box the jump in performance is not subtle, in fact it’s rather substantial – make no mistake it sounds like an RI-101 in terms of its tone, naturalness, transparency and texture, but it simply gives you more of everything. From a noise point of view it probably has more in common with an SIA-030 than an RI-101 if I’m honest – it is so quiet and comparing this to a mk1 side by side the improvements are quite obvious, the low noise floor certainly allows you to hear more.

The launch of the original RI-101 closed the gap on the SIA-025 and with this new model it has closed it that little bit further. It doesn’t sound as creamy, seductive and intimate as the Class A SIA-025 does and is in presentation terms is a more neutral sounding amplifier, but make no mistake the entry level into the Vitus range is pure Vitus through and through!

The RI-101 mk2 runs warmer than an RI-101 mk1 and an RI-100, however it won’t require any additional ventilation or space around it , it’s certainly not Class A warm!

Internally a lot has changed with this new version of the RI-101 and it isn’t a marginal upgrade, it’s much more significant than going from an RI-100 to an RI-101 mk1 for example.

Nothing stands still in this day and age and evolution is a good thing. Vitus wanted to extract more performance from their entry level amplifier and they’ve certainly succeeded at that!

Vitus produce an optional Streaming DAC Module for the 101, this offers an Ethernet socket with streaming from Tidal or Qobuz (as well as Internet Radio, Spotify and Deezer). Using MConnect as a control point it will also stream music stored locally on a NAS or a Melco via UPnP- this board is £3400.00 if bought at the same time as the amplifier (if the board is retrofitted it is £4000).  The DAC board also offers an AES/EBU (XLR digital input and a SPDIF RCA digital input. There is also an USB socket for connecting a Wi-Fi dongle should it not be possible top hard wire the ethernet socket to your router, the USB socket cannot be used for audio.

Depending on how you listen to music you could literally use an RI-101 mk2 with the DAC board as the ultimate one box system , simply add a pair of loudspeakers!

What’s in the box?

Not much in reality, but there doesn’t need to be! Once you have wrestled the box into position and opened it you will be presented with a power cable, the remote control (a simple zero fuss Apple remote which simply just works), the manual on a USB stick and of course a rather heavy amplifier presented in a nice velvet bag. 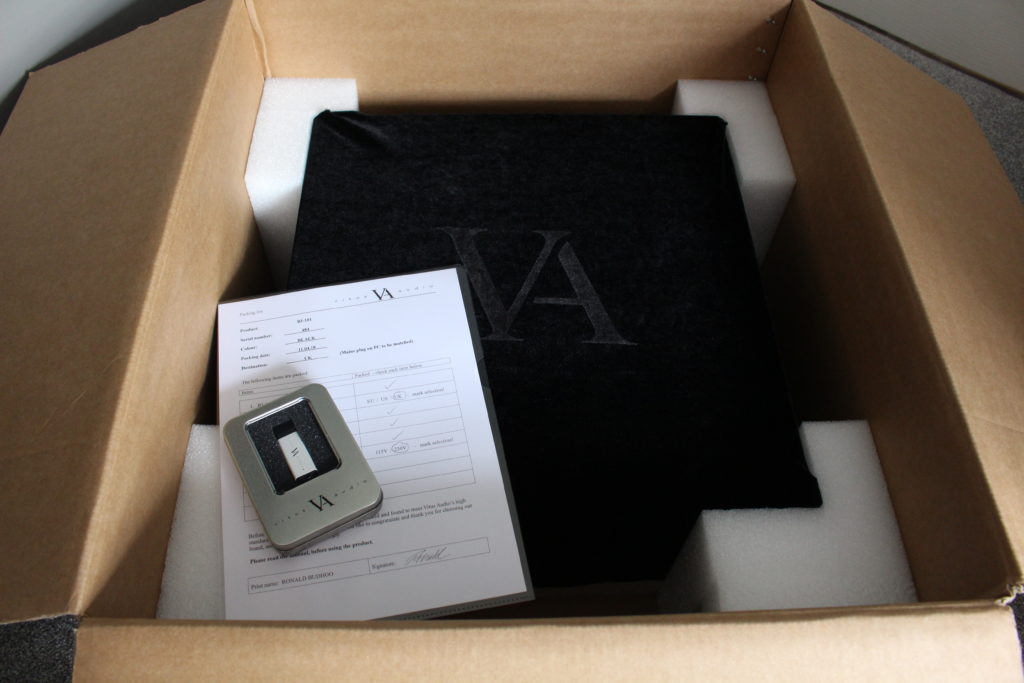 The all new Vitus RI-101 mk2 is fabulous, but of course the cynics out there will be saying to themselves I would say that. Those who know me, will know how honest and upfront I am. Just like the original 101 the mk2 truly offers performance way past its price point (this will see off many pre-powers at double the asking price). If you are looking for a one box amplifier that offers serious performance and gives you access to that ‘high end sound’ so many people crave, please get in touch and organise a demonstration.

Part exchange is welcome as well.

PLEASE NOTE : The DAC module for the RI-101 mk2 in it’s current form as outlined above is not available – the DAC is just about to be updated, pricing on the new DAC board has yet to be released, this change will bring about better performance and increased flexibility.